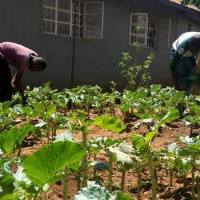 Into Africa is located in Kisumu, Kenya, East Africa. Kenya straddles the equator, resting on the coast of the Indian Ocean, in east-central Africa, with a population numbering over 41 million. The Great Rift Valley cuts a wide, steep swath through Kenya’s highlands. Its bordering countries are Somalia, Sudan, Ethiopia, Tanzania, and Uganda. Kisumu, the home of Into Africa, is the 3rd largest city in Kenya and is a hub of activity, being the thoroughfare between the coast and Uganda. It is strategically located on the western bank of Lake Victoria, the second largest fresh water lake in the world, the headwaters to the Nile River. This diverse, developing city is the home to some 500,000 people, about 50% of whom live below the poverty line. Kisumu has a 14% HIV/AIDS rate, which is double the percentage of the nation of Kenya as a whole. At least 60% of Kisumu’s population lives in slum estates, where most lack access to electricity, running water, and decent sanitation facilities, which means Kisumu also bears a high rate of malaria and water-borne diseases.